(Credit for profile picture goes to the artist that made it.)

First off, I am a steadfast supporter of the Bishōnen and Ikemen industry and market.

However, my figure collection is growing rather slowly since I'm college student and most of my money has to go towards my college tuition and laundry. ;v; (Luckily, I'm graduating next Fall!)

I mostly collect my favorite husbandos, and once in a while I also collect random male figures that catch my eye.

Admittedly, I am SEVERLY behind in my anime watching. My senior project for college has been taking up a lot of my time as of late.

What I have on my bucket list to watch atm is:
- Free! Dive to the Future
- One Punch Man Season 2
- SK8: The Infinity
- Rage of Bahamut Virgin Soul

The anime genres that I love the most are:
seinen, fantasy, reverse harem, action, adventure

If you guys have any anime recommendations that you guys think that I might be interested in, feel free to dm me!

Also, I'm up for just regular, old chatting as well! I would love to make some friends here on MFC! :D

Non-MFC figures that I own:

I am an art major in college and I often like to sketch in my sketchbook and make some digital art as well. I only just got into digital art mid last year so I'm still practicing!

Status: I will start uploading some of my art here over the summer. Atm, I'm busy with finals. :/

fantasy_trance
Oh, I am able to chat more still, I was just shy and did not want to take up too much of your time =w= But yeah, about Fire Emblem Heroes, the reason I say it can be boring is because it doesn't have enough fun game modes for me. Like, there's actually a lot of different events that go on and like rotate, but I usually just pop on to play my favorite mode which is the "tempest trials" when they come.

There's not really a cool down for Fire Emblem Heroes asides from you need stamina to keep playing, but it's really easy to restore and they give you so many free items to restore it, if you keep playing frequently enough, you won't even remember the stamina feature exists xD You get A LOT of free units though. If you start to play and you really like Chrom, you're going to want to save up and summon for Legendary Chrom when he comes up on a banner again because he's the most powerful Chrom in the game right now.

He's a really strong blue unit in the game, so if he's on a legendary banner, just keep summoning with the blue orbs and pray to the gods for luck! 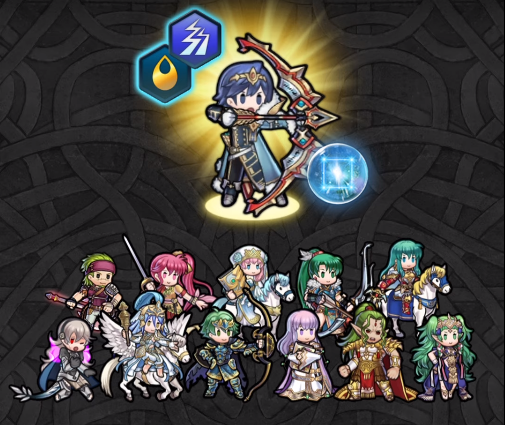 Makoto is literally so sexy. I really love him too. The way he is with children touches my heart as well since I have a soft spot for kids myself, ha ha~

I can't imagine Haru just working a regular job instead of devoting all his time to swimming... I'm glad he chose what he did, but boy, he went through trying to figure it all out. In the end, I ended up deciding to go to a one year film school program in NYC after high school, but towards the end of the program, I dropped out.

It's OK if you pick a wrong major. My older brother got his degree in psychology to work with children with autism, but he ended up never using it. I think he also had a degree in religion so I think that works better for him now since he's trying to be a priest or something (I'm not sure, we don't talk anymore). There are still many options open to you after college and even just having a degree will open lots of opportunities for you even if they are unrelated to your field of study. I know you'll figure it out; I'm glad you have the summer to think about it!

I really love gingers too!!!! x3 You reminded me of another Free! character I really loved. I always forgot his name, but I looked him up and it was Momo's brother, Seijuro ^0^

I really like the sweet soft bois too :3 Have you ever seen Yuri on Ice? I think Yuri is one of the softest bois ever... <3

I'm really looking forward to making AMVs again. I definitely will share my Free! amvs with you. My laptop right now is just such utter garbage... Ah, it hurts to say that because it was a gift to me from a friend I no longer speak to, but this laptop's time has come... it's time to die x.x i appreciate the use i got out of it over the last year though, it really helped me in a hard time.

But yeah, I know everything's going to work out for you and your college situation. Don't stress out about it! You know it will be alright :3 There are so many doors open for you.

Let your heart go where the wind takes you. <3

fantasy_trance
I LOVE cheesy unrealistic endings. Life is hard enough!! xD Fire Emblem Heroes isn't exactly Pay to Win but you do have to keep playing so you can get at least a couple of the most recent units or else you will be so outclassed. They give you a lot of free in game currency and the pull rates aren't that bad either. The game can get boring though, so it's something I only play when I need to pass the time :3

Here's all the characters voiced by Matt Mercer (the voice of Ryoma and Chrom) in Fire Emblem Heroes :3 feheroes.fandom...

You listed so many things about Haru I haven't thought about in such a long time ^w^ He really is so cute. He was my first favorite character my first time going through. I accidentally started Free! on the second season, so my first impression of him was this conflicted child who is torn between what he wants to do with his life after high school.

I really felt a connection to him because it was also my last year of high school when I watched Free! and I had no idea what I was going to do yet either. Haru's bond with the water is spiritual and it was healing to go on that journey with him in Eternal Summer to reconnect to his love for swimming. I think that's why I really like Haru, but I will also tell you why I like Sousuke because I actually hated him at first x3

...Is being sexy enough of a reason to like somebody or is that shallow??? Like??? Because I really did hate Sousuke at first for the way he treated Haru, but then it's like, I started to fall for him and those eyes.

I have thing for big, strong quiet types. I love guys with dark hair too. Sousuke was hitting every mark for me asides from being a major dick, but he warmed up at the end... He got nicer and I think that made him feel safe for me to love.

I had made an AMV for him a while ago. It's long lost now. I have to remake it. Free! has great footage for AMVs. I really love it ^_^

Hope to see you around and chat again soon!
Vor 3 Tagen

fantasy_trance
Fates was my first time experiencing a game that cut it's story into three different games. I loved Birthright so much though, I knew I wanted to play all three stories. I bought the limited edition cartridge as soon as I could once I found out it existed! ^_^

I can understand that conflict with Chrom and Ryoma completely. I have not played Awakening yet, but I do play Fire Emblem Heroes, and I was surprised by how many characters share a voice with Ryoma! I ended up falling in love with Chrom too LOL

I really really love Silas and Jacob. I wish I could marry everyone at the same time xD I'm still trying to beat Birthright. I lost my 3DS so I haven't been able to continue in a long time, but I am very excited to start again.

I haven't seen all the Free! movies but I did see Starting Days and it was really nice and wholesome. I think you will enjoy it very much. Free! is just a really good and chill series to watch. Thanks for the chat, it's been great making your acquaintance ^w^

ps, my favorite Free! character is Sousuke, who is yours?

fantasy_trance
hello there! your reply to my comment was really nice on your article, so i wanted to check out your profile. I noticed you like fire emblem fates too?!!!

I love how you have those items of xander, ryoma, and azura! i always say ryoma and azura are my husband and wife xD i just wish you could marry azura as the female character in the game though.

i hope you enjoy watching free dive to the future and rage of bahamut virgin soul because i personally loved those anime very much and watched them both in the same year. they were very good! i loved rage of bahamut so much, i actually had to binge it as soon as i started it.

kuroneki
Thank you!! That's so kind of you to remember and wish me a happy birthday every year - put a smile on my face! :D
Vor 1 Jahr

A few reasons why Free! is one of my favorite ecchi animes: