FairyTale -Another- Queen of Hearts www.myethos.hk/...

Keeping track of Dakis that aren't in the database:

And apparently I also missed your birthday, sorry about that and happy very late birthday.
Vor 23 Tagen

Tronks
I just got the figure, thank you for packaging her so carefully! She arrived very safely.
Vor 3 Monaten

bioproto
Jenthehen • Vor 3 Monaten • #83643920I don't. All I know is that they seem to ignore everything except for the shipping request change but ONLY after they've moved to "preparation in progress" it seems. So if you opened that ticket beforehand, you may need to open a new one. I got a figure shipped to me when I did this in like a week (bumped up to UPS) whereas tickets I have on a figure that was supposed to come out months ago get a cursory "no stock in yet" or else ignored. I opened a ticket requesting a refund recently, though, since I KNOW they aren't going to get more in stock.]

Thanks! I appreciate the help!
Vor 3 Monaten

Jenthehen • Vor 3 Monaten • #83643382You have to put in a specific ticket requesting shipping method change and ask for quotes on bumping up or down (you'll either have to pay more or get a refund). They seem pretty quick at responding to requests for shipping changes (if nothing else!)

PanchitoMatte Emilia-tan Maji Tenshi!
Hi, Jenthehen! So, I was browsing the MFC rules in my spare time and, long story short, ended up at an over 10-year-old comment of yours! Totally cool stuff. I gotta say, I was taken aback by the whole experience. The "Joined 11 years ago" detail at the top of someone's profile is neat 'n' all, but the serendipity that is seeing an ordinary person's ordinary contributions to [what eventually became an extraordinary] website — one that was celebrating it's second birthday at the time and whose breadth of community would surely pale in comparison to today — was such a fascinating adventure. It's like going back in time to read, for the first time, a newspaper from a generation in which you didn't live. Yep yep yep. Totally cool stuff, if I do say so myself. You're essentially a relic from MFC's early days! Anyway, thanks for being such a great member of the community, and here's a pic as proof. 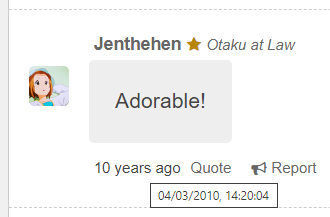 ChocolateSpider
Thanks for accepting the friend request. I could have sworn I already had you in there. But now that has been rectified. :3
Vor 10 Monaten
Mehr Kommentare Anzeigen