Local retailer sold me Chinese-translated version of an artbookDiaryZurückWeiterZurückWeiter

sho52Vor 14 Tagen
Not sure if anybody has written about this situation before. By chance, I saw this artbook ITEM #136493 available for cheap (32.99 EUR including Prime shipping) on Amazon.de from a local retailer (who also have their own website and shop) and thought why not buy local instead of shipping it from Japan.

(It's actually available on some Japanese second-hand sites at a lower price (used), so I didn't think of the price as suspicious at first.)

It arrived soon, still wrapped in plastic protection, and, surprise! It's actually a Chinese-translated version of the artbook available for 62 CNY (about 8.4 EUR) instead of the Japanese original...

I mean, it's not exactly a "bootleg figure" situation, since the Chinese translation is an officially copyrighted release aimed at the Chinese market. But:

1. In many cases, the quality of paper the Chinese publishers use to print the Chinese release of a book is simply worse than the original. That's one reason for the lower price in general. (Granted, I didn't check this one, as I immediately proceeded with a return instead of even opening the plastic protection. It could be that the quality here is the same or similar.)

2. It's a translated version, i.e. not in the original Japanese at all.

3. If I indeed wanted to buy an artbook from China (there are legit situations, e.g. when a Chinese artist has only released a doujinshi in China, or even when I indeed just want to buy an officially translated version), I could have simply bought it from any of the Chinese shopping sites and shipped it to me with my next bulk buying of figures from Xianyu...

4. Most importantly, it seems blatant dishonesty to me when the item listed on Amazon is the original JP version and the seller puts up the Chinese version for sale at 4 times the original price without any explanation. They must be making quite some profit out of this practice and think they're so smart. I left a searing review on their Amazon seller page... Not sure how much it's gonna help the other potential buyers though.

What I also find funny is I don't know if they honestly think folks here are not going to be able to tell the difference between Japanese and Chinese and are also going to gleefully ignore the Chinese title & the "62 CNY" price tag at the back side of the booklet, or if they think the buyers just don't care and may even happily get one of these even when it's not original. In any case, I find the lack of explanation on the Amazon listing really problematic.

This is one of the rather more curious experiences I've had so far, and I'd just like to write about it to see if it might be helpful or if somebody else has encountered something similar.
1,051 Hits • 3 Favouriten • 5 Kommentare

njdrawscomics Webcomic Artist
I definitely think you're justified a refund, if you aren't interested in keeping it you may want to contact them about the misinformation on the product.
Vor 13 Tagen

fang_
Had something similar recently where I ordered what I thought was the English release of an English-language single, but when I got it, it was a Japanese copy. Makes some sense, since the JP release was the most recent printing to my knowledge, but was still a bit odd to recieve. It somehow still had original inserts though, including a discount code that expired 10 years ago.
Vor 14 Tagen

Solarstormflare
Amazon is weird about doing this. I ordered a french version of a figure and they shipped me the english version instead
Vor 14 Tagen

KOS_MOS_42B
The same happened to me with the game Girls und Panzer: Dream Tank Match for the switch.
(Just realized it's not on the database)
Bought on Amazon, local seller. Product page specified Japanese version and used the Japanese cover art. Received the Chinese (or Taiwanese?) version instead. At first I didn't even notice. The game itself is the same in both versions so it wasn't a problem.

Anyhow, recently, I have tried to stop using Amazon (fr and de), especially for anime merch. But I have to say, Amazon jp is very good with very attractive shipping, probability won't stop using them.
Vor 14 Tagen

Either way, I'm wondering it's possible for you to get a refund? I heard some amazon products let you get refunds, so I hope you can get one!
Vor 14 Tagen⊛ 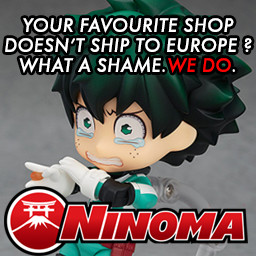