MoorinaVor 13 Jahren
I love Louise. This was probably the first figure that broke my heart because when I first saw it it was already sold out everywhere orz; But the good folks at Kotobukiya were nice enough to re-issue one of the first Louise figures made, and I pounced on it faster than Siesta on Saito.

SCULPTING:
8/10. Big cape is big. The cape is probably my favorite part of this figure. The body sculpt was what you'd come to expect from Koto, good but nothing too amazing. What disappointed me was her face. Since this is an older figure, I'm sure everyone's heard about it, so I'll keep it short and sweet: it's basically Tabitha's stoic face but with Louise colors. She also seems a bit tall, since Louise is suppose to be really short but she's about the same height/taller than some of my other figures.

PAINTING:
6/10. Boring paint is boring. What is most striking about Louise is her flashy, bright salmon-colored hair, and what's most nonstriking about this figure is the washed-out old-bubblegum colored hair. Although in low light the hair seems ok, when taken out and used for photos, the figure's hair becomes lifeless and pale. The paint job on the skin is pale also, barely there. The cape and clothing are better in comparison. The book and her necktie thing are amazingly detailed and clean. Interesting note, the black, upper side of her cape has a rough paint, while the bottom has a smooth paint, which makes the rough side tougher to dry after cleaning.

POSING:
8/10. Meh. It's what you'd expect from a character who is from a magic related show (coughharyypottercough). I'm not sure how I feel about Louise pointing out her hip so much forward though. I think it's to counter balance the cape, but without the cape it just looks weird, especially from the side.

BASE:
10/10. One of the nicest flat bases I own. It's a translucent yellow with a round, spell-casting symbol of a star and the spells written out around in typical magic-casting fashion.

PACKAGING:
10/10. The box is really nice. There is a big window in the front where you can literally see everything, two windows on either side, and a backside with the figure's image and such. What I love is the kind of old, burnt paper look of the entire box and the usage of the spells on Louise's base as decoration. There's also a big, cut-out star on the lid and a window.


ENJOYMENT:
8/10. Pretty to look at from afar or from someone who don't watch the show. I just don't think the figure is a good enough representation of the character of Louise. The pose and sculpt are average.

OVERALL:
8/10. It's not a bad figure, don't get me wrong, but it just lacks creativity. The figure is nice on its own, but when linked to Louise, it doesn't do her justice. If you're not too picky, then this is a great figure to add to your collection, as it does draw attention with it's grand cape. Personally speaking, I would have not gotten this figure if she didn't have that big flowing cape.
9,771 Hits • 0 Favourit • 5 Kommentare

Chloe-tsundere The louise otaku
Might be considered a spoiler so View spoilerHide spoiler her dull eyes remind me of when she casted the world portal, where it suddenly happened and her eyes tutned blanco, but thrn they had yo remove the white too i agree her hair is a bit p.. Different. I think they based it off the LN i guess where her hair is less bright but still brighter than this yes. Her book is also a flaw, too big. She has a tiny book for her void spells.. And has zero ability for other magic and never used a book for regular spells :) her cape is amazing but then you could buy tabitha who has the big cape as well :)

Like your review. I plam to make reviews of all louises i have soon ^^
Vor 7 Jahren

ichigo_m
Thank you <3
I've always loved this pose, but never jumped on it when I saw her at cons because of her face, now I realize she isn't that amazing~

Lenneth the blue valkyrie
It did the same for me. I saw it rereleased and wondered if it was worth getting. I then headed to the number 1 source of info when I knew I could find info on any figure. (xDDDDDDD) and I read this. Mona, my favourites too are the Bustier ver and the ladder ver.! I can't wait to see them get the same treatment as this one.
Vor 13 Jahren

I really was thinking of getting her but after reading your report I felt my doubts confirmed. The figure is nothing like Louise. The figure as no emotion at all and everything except the base seems boring.

I think the Bustier version and the ladder version of her are still the best! 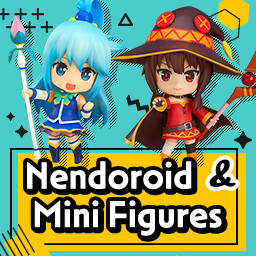